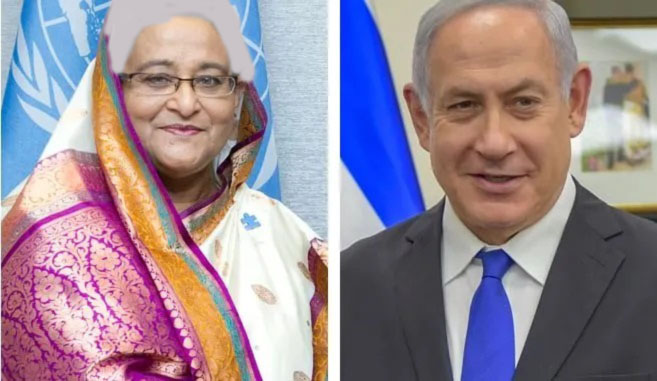 The New Age and other leading newspapers in Bangladesh published a report on January 11, 2023 that Bangladesh government secretly bought spyware and advanced surveillance tools last year from a company run by former commander of the intelligence’s technology unit of the illegal Jewish entity ‘Israel’. The hypocrite Hasina government has chosen to be a partner with those who are cursed by the Lord of the world (SWT). Who among the Muslims can collaborate with the staunch enemies of the Ummah for spying and torturing them except those who themselves bear deep hatred for the Muslims! Allah (swt) says, *لَتَجِدَنَّ أَشَدَّ النَّاسِ عَدَاوَةً لِلَّذِينَ آمَنُوا الْيَهُودَ وَالَّذِينَ أَشْرَكُوا* “You will surely find the most intense of the people in animosity toward the believers [to be] the Jews and those who associate partners with Allah” [Surah al-Maida 5:82]. In January last year, these traitors had sent our naval forces to an International Maritime Exercise (IMX) in which ‘Israel’ also joined for the first time. The head of the Crusaders, America, organized that drill as part of fostering ties between the Muslim countries and the illegitimate Jewish entity. It is obvious that the traitorous Hasina government wants to slowly normalize the relations with the occupying Jewish state to serve American geopolitics and protect its throne thereby. Indeed, this government is amongst the ‘zalims’ (oppressors) who are earning Allah’s wrath by going against His (swt) command and making alliances with the Jews and the Christians:

“O you who have believed, do not take the Jews and the Christians as allies. They are [in fact] allies of one another. And whoever is an ally to them among you – then indeed, he is [one] of them. Indeed, Allah guides not the wrongdoing people (zalimeen).” [Surah Al-Maida: 51].

Moreover, not only the current rulers are complicit in such treachery, other secular opposition party leaders are also seen to be in touch with the leaders of occupying ‘Israel’. Previously BNP Joint Secretary General Aslam Chowdhury’s and recently former Dhaka University Central Students’ Union (DUCSU) VP and leader of Bangladesh Gono Odhikar Parishad Nurul Haque Nur’s controversial meetings with the senior politician named Mendi N Safadi of the illegal Jewish entity have stirred up people’s sentiments. Thus, the traitors, secular rulers and opposition party leaders deceive the Muslims by showing fake solidarity with the Muslims of Palestine, while secretly befriending the invader of the blessed Aqsa Mosque.

O Muslims! The crux of the secular politics and ruling system is benefit and expediency. In the secular realm, there is no space for normative Islamic beliefs like Al-Wala’a wal Bara’a (Loving and Hating for the sake of Allah). Loyalty to Allah, His Messenger (SAW) and believers, and the disassociation from the disbelieving enemies of the Muslims is replaced by absolute allegiance towards the Kafir Colonialists in this Western hegemonic world-order. The secular politicians and rulers of our lands born out of the womb of this world-order are destined to preserve the interests of the Colonialist powers. Their politics is not based on the caring guardianship of the Ummah and unification of its resources and strengths to liberate it from the shackles of the Kafir Colonialists. Thus betrayal, suppression and tyranny are the core essence of their politics. So, you must reject these treacherous secular rulers and their oppressive ruling system, and strive to bring back the promised Khilafah Rashidah (rightly-guided Caliphate) on the method of Prophethood. The imminent Khilafah will account these traitorous agent rulers in this world before Allah Al-Qawwy, Al-Azeem accounts them on the day of the judgement. RasulAllah ﷺ told us about the fate of such traitors: “Every traitor will have a flag on the Day of Judgement to identify them according to the amount of their treachery; there is no traitor of greater treachery than the leader of the people” (Muslim/ Bukhari).